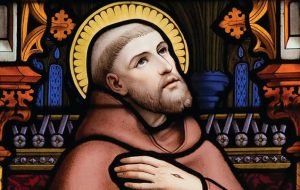 The Life of St. Francis of Assisi
from Praying With St. Francis
translated by Regis Armstrong & Ignatius Brady

Francis of Assisi was born in 1182 and died in 1226. Of his comparatively short life, less than twenty years were spent in active Christian ministry; yet by the time of his death, brothers of the Order which he founded had travelled through much of Europe, the Mediterranean area and North Africa, and the Order had already had its first martyrs.

The story of Francis’ conversion is well known – how as a young man in his early twenties he abandoned life of ease and comfort to embrace the Lady Poverty. Giotto’s paintings on the walls of the basilica in Assisi where the saint lies buried, graphically illustrate incidents from his early life. Typical of the fashionable youth of his time, Francis was imbued with the romantic spirit of chivalry. He took part enthusiastically in the fighting between warring city states of central Italy, and was eventually captured and held prisoner for a year in the neighboring city of Perugia. During this time he became severely ill. Ransomed by his father, a wealthy cloth merchant, he returned home to Assisi, but he never regained his former health and high spirits. In 1204, on the eve of setting out once more to do battle, he experienced a vision which caused him to abandon his ambitions for military glory and to espouse a life of poverty.

It was while Francis was praying before the crucifix in the near derelict church of San Damiano, outside the walls of Assisi, that he heard a voice telling hi to ‘rebuild my church’. With typical enthusiasm he took this literally, sold some bales of cloth from his father’s warehouse and donated the proceeds to the parish priest. This impulsive action led to his being publicly disowned by his father, whereupon, in a dramatic gesture, he stripped himself naked before the assembled populace of Assisi, symbolizing his break with the past. ‘Henceforth,’ he declared, ‘I shall say “My Father who art in heaven”, not “My father Pietro Bernadone”.’

From then on, Francis lived as a mendicant, owning nothing but a rough tunic, begging or working at menial tasks for for his food. His particular concern was for the outcasts of society. When he encountered a beggar who was suffering from leprosy, the disease which above all inspired horror in the respectable people of the day, he forced himself to overcome his natural repugnance, embraced the man and gave him his tunic. Subsequently he went to live for some months with a colony of leprosy sufferers near Gubbio.

In 1208, while attending Mass on St. Matthias’ day, Francis heard read the Gospel for the day:

And as you go, preach the message, ‘The kingdom of heaven is at hand.’ Cure the sick, raise the dead, cleanse the lepers, cast out devils. Freely you have received, freely give. Do not keep gold, silver or money in your girdles, no wallet for your journey, nor two tunics, no sandals, nor staff; for the laborer deserves his living (Matthew 10.7-10).

Instantly, Francis recognized God’s call in these words of Scripture. It was the way of life for which he had been searching. It was the way he was to follow, quite literally in every particular, till the day of his death.

He embarked at once on a preaching ministry, and was soon joined by the first few of his companions. Together they travelled to Rome, to obtain the Pope’s approval for a simple Rule for the embryo Order. The small church of the Portiuncola at St. Mary of the Angels near Assisi which the brothers rebuilt with their own hands, became their base, from which they constantly travelled on preaching missions to the surrounding countryside.

The Order of Friars Minor grew rapidly, and was soon sending missions beyond Italy to other countries in the Mediterranean area. Francis himself travelled to Spain, Dalmatia and, most dramatically, to the Holy Land and to Damietta in Egypt, where there took place his famed encounter with the Sultan in 1219, during the time of the Fifth Crusade. The first mission to England took place in 1224.

During these years Francis was suffering from increasing ill-health, particularly from deteriorating eyesight and from ulcers on his legs and feet (it has been suggested that he may have been diabetic). In 1220 he gave up to another the leadership of the Order, though he continued to make preaching tours throughout central Italy, seated on a donkey or carried on a litter. His influence within the Order remained strong, and when the Rule was revised and rewritten in 1221 (in this book referred to as the ‘Earlier Rule’), and again in 1223, it contained passages of exhortation and admonition which clearly originated with Francis himself.

It was in September 1224 that Francis received the stigmata, while keeping a forty-day fast at a mountain hermitage at La Verna. Thereafter he became progressively more ill, almost blind and unable to walk without pain. It was recorded of him that ‘he could not bear the light of the sun during the day or the light of the fire at night. He constantly remained in darkness inside the house in his cell. His eyes caused him so much pain that he could neither lie down nor sleep’ (The Legend of Perugia). Yet, according to tradition, it was at this time that he wrote the Canticle of the Sun, with its praise of Brother Sun and Brother Fire.

It is Francis’ love of nature, epitomized in the Canticle, which has most endeared him to modern Christians, to the neglect of other aspects of his spirituality. Yet his love of all created things was simply an extension of his deep love of the Creator. His biographer, Thomas of Celano, wrote of him not many years after his death:

In every work of the artist he praised the Artist; whatever he found in the things made he referred to the Maker. He rejoiced in all the works of the hands of the Lord and saw behind things pleasant to behold their life-giving reason and cause. In beautiful things he saw Beauty itself; all things were to him good. ‘He who made us is the best,’ they cried out to him. Through his footprints impressed upon things he followed the Beloved everywhere; he made for himself from all things a ladder by which to come even to his throne.

He embraced all things with a rapture of unheard of devotion, speaking to them of the Lord and admonishing them to praise him. He spared lights, lamps and candles, not wishing to extinguish their brightness with his hand, for he regarded them as a symbol of Eternal Light. He walked reverently upon stones, because of him who was called the Rock.

He forbade the brothers to cut down the whole tree when they cut wood, so that it might have hope of sprouting again. He commanded the gardener to leave the border around the garden undug, so that in their proper times the greenness of the grass and the beauty of flowers might announce the Father of all things…he ordered that honey and the best wines be set out for the bees, lest they perish from want in the cold of winter.

His failing health did not prevent Francis from continuing to visit towns and villages of Tuscany and Umbria, until the late summer of 1226 when, his condition grown worse, he was taken to the palace of the Bishop of Assisi. In late September, when it became clear that his death was imminent, he insisted on being carried down the hill to the Portiuncola. In the Little Flowers of Saint Francis there is an account of this last journey:

The friars took him up in their arms and carried him on the way toward St. Mary of the Angels, accompanied by a crowd of people. When they reached a hospital that was on the way, St. Francis asked whether they had arrived that far, because as a result of his extreme penance and former weeping, his eyesight was impaired and he could not see well. so when he was told that they were at the hospital, he said to those who were carrying him: ‘Set me down on the ground and turn me toward Assisi.’

And standing in the road, with his face turned toward the city, he blessed it with many blessings, saying:

‘May the Lord bless you, holy city, for through you many souls shall be saved, and in you many servants of God shall dwell, and from you many shall be chosen for the Kingdom of Eternal Life.’

And after he had said those words, he had himself carried farther on to St. Mary of the Angels.

Francis died on 3rd October, 1226. As he lay awaiting death, he asked the brothers to sing psalms of praise, in which he himself joined as far as he was able. He requested that there be read to him the story of Christ’s passion from St. John’s Gospel. Then, at list, in the words of Thomas of Celano, ‘when many brothers had gathered about…his most holy soul was freed from his body and received into the abyss of light, and his body fell asleep in the Lord.’

Reprinted from hnp.org, the website of Holy Name Province.