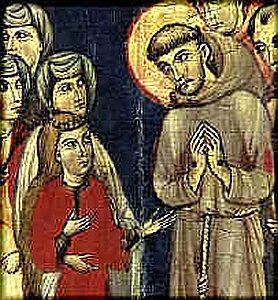 Eventually some of these tertiaries started living in communities. These later developed into a religious order professing vows of poverty, chastity and obedience and now referred to as Third Order Regular (TOR). Members of these communities can be male or female but they live in community according to their gender. This branch of the Franciscan Family was officially founded in 1447 by a papal decree uniting several groups.

Today there are hundreds of Third Order Regular communities around the world, including several groups serving within the geographical boundaries of our Province, including:

The Third Order Secular (Ordo Franciscanus Saecularis, in Latin), known as the Secular Franciscans, includes devout persons, both men and women. Members do not live in community, but live their everyday lives in the world. However, members do gather together in community on a regular basis. They profess vows and commit themselves to living the Gospel according to the example of Francis. The process of becoming a Secular Franciscans involves a commitment of from 18 to 36 months of formation. There are nearly 13,000 Secular Franciscans in the United States today.

Franciscans in the Anglican Communion (Society of Saint Francis-SSF)

For more information concerning our brothers and sisters of the Franciscan family in the Anglican Communion, see: www.anglicanfranciscans.org

For more information concerning our brothers and sisters from various faith expressions, are of the Franciscan family in the Order of Ecumenical Franciscans (OEF), see: www.oeffranciscans.org