In September, 2016 our brother, Friar James Seiffert, left California for an extended mission immersion experience in Vietnam as a guest of our confreres there. Here are some excerpts from his letters home to the friars, which were previously published in our provincial newsletter, OFM.FYI.—ed.

Brothers, I am settling down here in Saigon, where I am presently at the seminary of studies. It is the combined school of philosophy and theology for the simply professed. Next to us is the aspirancy house which is separated from the seminary. The friars have been most welcoming and warm in their hospitality. The Guardian, Fr Joseph, has been most accommodating. I even managed to get an air-conditioned room! They are taking good care of me. I still have the jet lag, and I have been waking up at 1am Vietnam time. Morning prayer is a challenge at 5am.

The seminary has a monastic feel when it comes to liturgy, as well as a joyful spirit of fraternity. The grounds include the school, retreat center, and lovely gardens. It is hot and humid, but not stifling, at least not yet. It rains on and off during the day. I haven’t ventured yet to downtown Saigon. A student friar is going to go with me, so I can learn the ropes about taking the bus and getting around. I brought along with me some flower seeds of California poppies. One of the friars is a gardener and he is going to plant them in one of the lovely gardens that they have here. The food is fantastic, but, no, I am not eating fish every day for breakfast. But today, I ate pho for breakfast– delicious. You are all in my prayers. Please keep me in yours.

It has truly been a blessed beginning on my Vietnam Mission Immersion experience. The friars here in Saigon, have welcomed me with open hands and hearts. I am now staying at the seminary of St Francis in Saigon. The seminary is a house of studies for the temporary and solemnly professed of OFM friars as well as other religious orders and communities. I have been teaching English to the student friars.

In the classroom it’s a reciprocal experience of learning to understand the Vietnamese culture, and at the same time working to share my own experience of Franciscan life with the students. I find the Vietnamese language melodic when sung during the liturgies. I beginning to get a feel of the language when we sing the Office. We are working on making arrangements for me being tutored in Vietnamese.

The food has been delicious and eye-opening. I never knew there was such diversity in Vietnamese cuisine. I have had a different dish of food every day and at every meal.

I have had a memorable experience of seeing ten friars of the province profess their solemn vows. The friars in Vietnam have a beautiful tradition of after professing their vows, they return to their hometown parishes for a Mass of Thanksgiving. I was fortunate to travel with 25 friars to the hometown of three solemnly professed friars. We traveled by chartered bus to the outskirts of Saigon into the countryside. I was able to see the beautiful rice fields and rubber tree farms. I got to meet the families of the solemnly professed friars. The Mass of Thanksgiving was a truly parish community event. After the Mass there were huge gatherings of the hometown parish to celebrate with food, music, and fun. What has struck me more than anything is how we as friars are so connected to each other, even with our differences in culture, language, and traditions. The Lord has truly gifted me with Vietnamese brothers. Please continue to pray for me, and thank you for your best wishes and support. 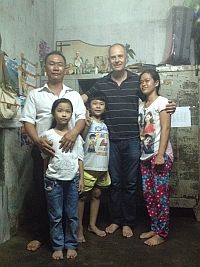 Since I arrived in Saigon in early September, we have had almost daily torrential rain. Well, the rain has stopped and we are now in the dry season which should carry us through for the most part of winter. I am still at the seminary of studies, where Friar life is a buzz of activity.

Life in most of the Vietnamese friar communities start with morning prayer at 5am, and the seminary is no exception. The seminary houses about 80 student friars, and it is still a challenge for me remembering all their names. Oh, and all of the student brothers have two names, their given Vietnamese name and their Christian name. I have a brother tutor who helps me with basic survival Vietnamese. Actually, he is of a great support for me particularly in navigating and understanding the breviary in Vietnamese. The challenge with Vietnamese is the different tonal accents to a word which can change the meaning of a word.

March 2, 2017
Chao Thay! So nice to hear from you. The student friars love, and I mean love American English idioms. I will share with them another one: “What’s cooking?” Thanks. I will be leaving the seminary in mid-March to go to the novitiate in Da Lat.

I have (also) participated with the student friars in their ministry with the deaf. Some of the brothers know sign language and teach catechism to the deaf children. I was born in the Bronx in New York City, and I lived at that time in a multi-cultural immigrant neighborhood. My family was of Irish and German descent. I am 58 years old. I have worked for United Airlines for 22 years. primarily in reservations and sales. I have traveled to many parts of the world, but I have never lived in a different country until I came to Vietnam as a missionary friar. I have been a tourist to many places, but living in Vietnam has opened myself to experiencing the cultural life of a different country particularly with my relationships with my Vietnamese Franciscan brothers. It has been a beautiful and life giving gift. 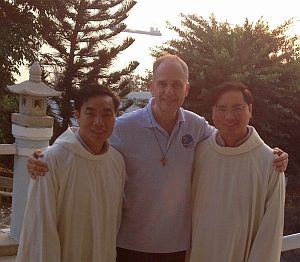 I had a wonderful time meeting with Cistercian monks Peter Tu and Anthony Khan at their monastery in Vung Tàu Vietnam. The brother monks lived at St Elizabeth’s (Oakland, CA) about 2 years ago studying English. Peter now works at the monastery retreat center while Anthony works in the library. It was good catching up on our lives together. The Cistercian Monastery is ideal for retreat with beautiful gardens and a breathtaking view of the South China Sea. The monastery is located in Vung Tàu which is about a 2-hour drive by bus from Saigon.

March 24, 2017
The Mass and inurnment for our confrere, Father Stephen Tan Nguyen was held on March 24, 2017 at St. Francis Seminary in Saigon, Vietnam. The presider was Fr Joseph Tinh, OFM. Fr Joseph led the procession of over eighty student brothers and the community toward the columbarium for the inurnment of Fr Stephen. I was the sole representative of the St Barbara province. There were no relatives present for the inurnment of Fr Stephen. The student brothers who accompanied me in the procession were Br Joseph Duy and Br Peter Tien.

The community of St Francis Seminary received the remains of Fr Stephen on March 23, 2017, where he was placed on a family altar. Family altars are traditional in Vietnam. Every Catholic home in Vietnam have ancestral family altars. The altars have pictures of the deceased members of the family along with statues and pictures of the Holy Family, the crucifix, and the saints. The family altar at the seminary has pictures of all the deceased members of the community. In traditional fashion, incense and candles were lit, along with prayers and devotional songs were offered for Fr Stephen. It was quite a moving experience to see how the deceased members of the family are honored and still a part of life in Vietnam. Once a week, the student friars and the community offer their prayers and song in front of the ancestral altar. The friar community here at the seminary truly honored him as a friar returning home. 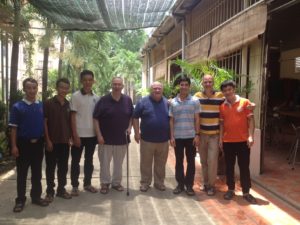 Brothers, “Chuc Mung Phuc Sinh!” -that is, “Happy Easter!” in Vietnamese. I have been at the novitiate in Da Lat now for several weeks. Da Lat is about an 8-hour bus ride north central from Saigon. It is situated in a mountainous area, where the climate is temperate rather than tropical. It’s delightful being here with the cool temperatures and the abundance of a variety of flowering plants and pine forests. In former days, Dalat was the resort town for the French colonists. You can still see the French influence by the architecture and the many gardens that can be found in the area. The novitiate has its share of beautiful gardens with a view of the surrounding mountains as well.

My days are spent with the community of novices in prayer, work, and some English classes. I have spent time doing all kinds of work that I have never done before! I have worked on the farm with planting, feeding rabbits, chickens, and pigs.

The novitiate is largely supported by its various nurseries, which employ some 60 workers These are flower nurseries, whereby the flowers are sold to various businesses in the area. I am always amazed at everything the novices are able to do– from building a hermitage by themselves to maintaining the grounds and novitiate buildings.

This Easter has been especially significant for me in that I renewed my vows at the novitiate here in Vietnam. It has caused me to reflect on how I have responded to the Lord’s call. A lot of my response has been to let go of control and to surrender to what God has invited me to. I am truly thankful for the life-changing and life-giving experiences I have had so far a friar living here.