Meet the Franciscan friars of the Great Northwest! At present, we have two major fraternities (houses) of friars in the region: one with a concentration of men living and working in the Portland, Oregon area; the other, in Spokane, Washington. The Franciscan Province of St. Barbara boasts a rich, deep, and long history of commitment in the Pacific Northwest. For more than a century, friars have served in parishes, schools, retreat centers, and outreach programs to people in this vital part of the United States. At one point, there were so many friars active in this region that there was even serious discussion of forming a separate province.

Times have changed and the institutional involvement of friars has necessarily shifted as, like many religious communities, we have experienced diminishing numbers and the aging of our members. But the spirit of the friars who continue to serve the region has certainly not diminished. They continue to provide vital witness to the Gospel and to Franciscan values of hospitality, acceptance, concern for peace, justice, and the integrity of creation. And joy! Don’t forget Franciscan joy! 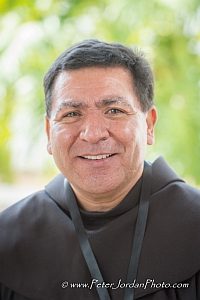 Two of our confreres currently serve at St. John the Baptist Parish in Milwaukie, a near suburb southeast of the city of Portland. At age 50, Father Jorge Hernandez (pictured at right) has been Pastor of this thriving, multicultural faith community for the past eight years. In addition to well-attended liturgies in both Spanish and English, the parish boasts a vibrant parochial school as well as a complete program of faith formation for all levels. A native of San Francisco del Rincón, Guanajuato, México, Father Jorge recently celebrated his 25th jubilee as a friar. In addition to his position at St. John the Baptist, Father Jorge also worked at Ascension Parish, Portland, which the friars staffed for nearly a full century. He holds an MA in Liturgical Studies (2010) from the University of Notre Dame.

In his efforts, Father Jorge is assisted by his parochial vicar, Father Richard Juzix, A native of San Francisco, and now at age 69, Father Richard has a long record of service in the Northwest. He first came to the area in 1975 and in the intervening years, has worked at a number of parishes in the region. At present, he is involved mostly in sacramental ministry: liturgies, home visits, and hospital work, which he thoroughly enjoys.

(Just across the street from the parish is the Franciscan Spiritual Center, staffed by the Franciscan sisters of Philadelphia, with whom the friars have enjoyed a long and fruitful friendship and collaboration in ministry going back several decades)

Up the road a few miles, Friar Pat Evard, serves as Director of Francis Center, an outreach program providing food, clothing and essential services to the people of southeast Portland since 1968. The Center serves more than 1,000 people a month, helping struggling families, the elderly, and the homeless in the area with a dedicated “heart corps” of volunteers and benefactors. At age 84, Father Pat is possessed of incredible stamina and a deep devotion to serving the poor.

Also living and working in Oregon is our confrere, Father Ben Innes, 64, administrator of St. Mary Star of the Sea parish in historic Astoria, a two-hour drive north of the Portland close to the Washington state border. A gifted homilist and natural public speaker, Father Ben connects easily with young people and has given workshops and retreats both around the country and internationally. 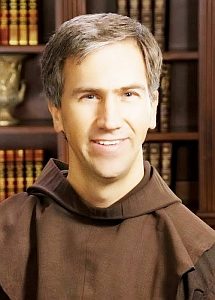 Father Michael Blackburn (pictured above), 61, has been pastor at St. Francis Parish for more than a decade now, and continues to delight in his parishioners—as they clearly delight in him. Weekday Masses– even in inclement weather– continue to bring loyal worshipers to the Heroy Street sanctuary. Liturgy always includes a stimulating, shared homily. Sunday Mass includes a spirited choir, hearty “Amens!” which seem to leap from the church body, and a well-attended coffee hour afterwards. Michael’s preaching style is deeply grounded in Scripture study and pastoral experience, yet loses nothing in passion and intensity for all of that. . . . Brother Jeff Shackleton (pictured at right), 53, has just finished a two-and-a-half year commitment to working the late shift as night chaplain at Sacred Heart Hospital. Now, it appears that Jeff is moving to a more “sane and sensible” work regimen, with a shift to the day shift. In his rare free time, he has been catching up on sleep, checking in with the friars, and keeping in touch with nearby relatives (Jeff is a native Spokanite) and friends. . . . Father Philip Garcia, 68, is settling in nicely since his move from Old Mission San Miguel recently. He serves as chaplain to the Poor Clares and spends a tremendous amount of time and effort on his deservedly well-regarded homilies. . . . Brother Moisés Gutierrez, of the Sacred Heart Province, is in residence at St. Francis, and is in his second year of studies for a Ph.D. in Global Leadership Studies at Gonzaga University.

What is it like to be a Franciscan friar in the Northwest? Father Jorge sums it up this way: “There is a lot of work here! This is a territory that offers the opportunity to live what you preach. This is a place where people need a lot; they are hungry for ministry, that’s for sure. I like mostly the relationships we have with the people here, and there is the natural beauty of the area as well.” Amen, Brother! And welcome, everyone!